We operate 7 DJI Phantom 4 Pro V2.0 drones. Each one has a dedicated tablet device that runs the drone software (Samsung Galaxy Tab A7 Lite, running Android v12). We are using Ctrl+DJI (version 1.9.10) and Pix4Dcapture (version4.11.0) to plan and execute automated flights. We also run DJI GO 4 (version 4.3.52) to perform basic maintenance - such as compass and IMU calibration.

Two of our drones are currently experiencing a situation where a mission is planned, passed to the drone, the drone launches, flies to the start point, orients itself for the first run of photos and then stays in that position, ie: the mission itself does not commence. The status on the pix4D screen says “Going to mission…” and the drone does not switch to “Flying mission”. We end up terminating the flights (after giving 5-8 minutes for the situation to self rectify - we’re optimists) using the RtH function.

Welcome to the community!

Do you happen to have screenshots of the “Going to mission…” and “Flying mission”?

Have you had a chance to check if it’s due to any of the issues listed in these articles: Drone connection issues - PIX4Dcapture and Troubleshooting - PIX4Dcapture

Based on this description

"a mission is planned, passed to the drone, the drone launches, flies to the start point, orients itself for the first run of photos, and then stays in that position, ie: the mission itself does not commence. "
It seems like an issue between the drone and our app? Do the devices used to fly those two drones happen to be Andriod devices? Sometimes the drone manufacturer’s original app is not selected as default if there are multiple image acquisition apps in one device.

Thanks for your welcoming message. I’m out of the office for a couple of days. Hopefully I will be able to respond to your questions on Friday.

No worries. Take your time.

I tried to fly a mission again today and took a couple of screen shots of when the drone arrived at the start of the mission. These two shots were taken a minute or so apart - and the drone was just hovering, aligned with the mission flight line but not commencing the mission.

This is the first shot, when the drone had just arrived at the Start point. 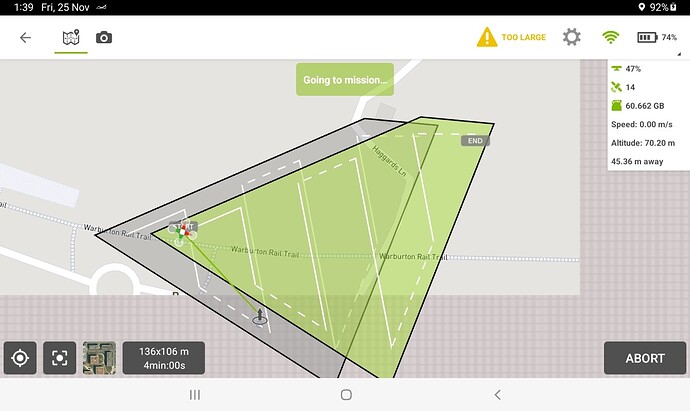 I will send the other screen shot in another message (system only allows me to add one attachment at a time).

Any ideas would be greatly appreciated. 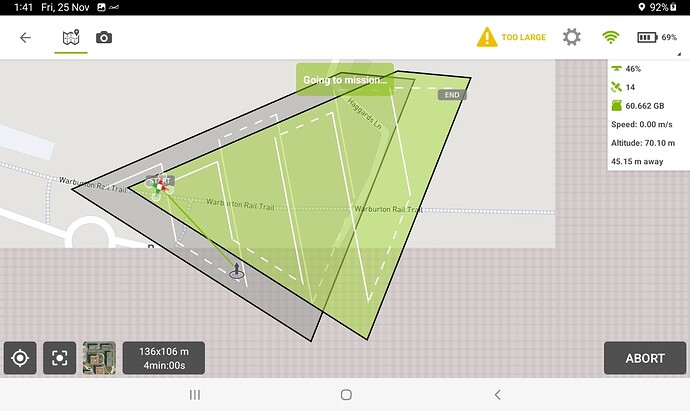