calibrated photo shown at an angle

Hello again - and thank you for being such great support!

I’m just learning Pix4D - and on a couple of my drone survey missions, there’s a photo depicted at an angle. In the case I’ve included in the screen shot - it was the last photo of the grid, and the drone was turning to head home.

I suspect that the drone moved more rapidly than the gimbal could compensate - keeping it pointed down - but that’s just a guess. I do have the gimbal retract to a level position after the last photo - so it’s possible this photo was taken then.

My question to Pix4D is how does Pix4D determine the angle of the photo? I operate ArduPilot and pitch and roll are data collected for georeference, but I don’t believe it’s applied to the EXIF. I could be wrong about that.

My guess is that Pix4D is determining the angle of the image through some sort of image interpretation. But that’s just a guess.

Sorry for such a detailed question. I appreciate any information you can provide. 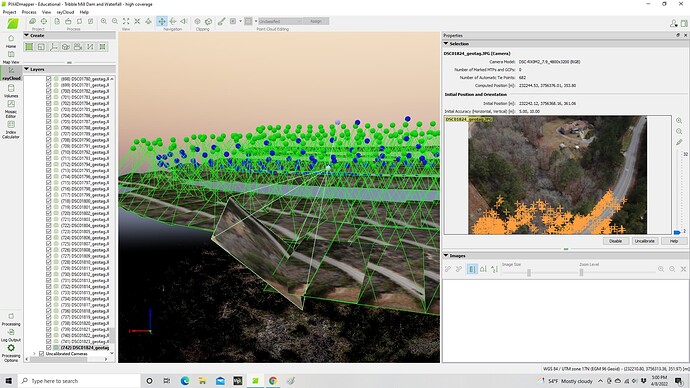 Hi Joe,
Your assessment is pretty spot on. Mapper will take the initial values, which are the GPS recordings and orientation values (if available) that are embedded in the Exif data, then computes where it thinks it actually is located. This computed position is known as the optimized value.

You are also correct that for Mapper to fully utilize the Accurate Geolocation and Orientation method for calibration, which you would use for RTK operations, then the Exif tags must contain the image coordinates, and the orientation values. The orientation values are known as the phi, omega, kappa.