Do you know the recommended classes for NDRE?

It really depends on the crop/stage/stress but generally I would roughly say from my experience:
-1 to 0: inanimate objects, water, dead plants
0 to 0.15: stressed or sick plants (or low leaf area, early stages of crop)
0.15 to 0.2: unhealthy plants
0.2 to 0.3: moderately healthy plants
0.3-1: very healthy plants

You need to be careful of low canopy coverage and low NDRE values, sometimes the crop is better than you think, it just has a low leaf area so it reports a low NDRE due to more soil visibility.

Indeed it is quite big but if you use it often you would see probably the highest you will find is 0.6 or even .7 in some cases. I don’t think I have ever seen a 1, at least not with a calibrated camera. 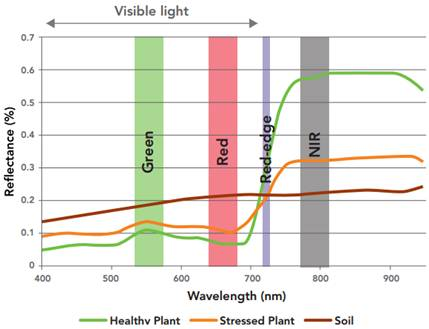 If you think about it the Red Edge (RE) is centered between the highest reflection of NIR and the absorption (low reflectance) of Red (R). This is not always the case but we can assume this roughly. You might consider that RE can never be much more than half of NIR or double that of Red. Red Edge can never be zero if you are looking at a plant with any sort of health. If it’s an object or soil then these limits don’t apply.

Hopefully that illustrates the reasoning behind the breakdowns. It’s possible you could change the ranges to .4 to 1 if you wanted but these were general ranges I use for diagnostics in fields of my own.

Very good, Nathan…
However, do you use these class intervals to evaluate a crop, involving time series with periods of greater and lesser rainfall?

Would the classes suggested by the Equal Área algorithm be recommended for time series?

What would be the best way (classes) to evaluate a crop over time?

I very much agree that these numbers are not bulletproof for an entire season. Depending on the crop they will vary and especially on the stage… Early season crop has very little canopy and unless you can isolate the individual plants you won’t learn much about the plants but rather the soil.

As to your question about equal area for time series, I agree in order to compare you will need to keep these things standard, if they are all different you can’t compare anything.

The best way to compare over time is probably using those ranges provided earlier with the expectation that early season is not as meaningful until the canopy is more full and less soil is visible. Midseason is great for fertility decisions for nitrogen (NDRE is quite robust and does not show bias toward varieties like the NDVI does). Another benefit is at the end of the season NDRE is very good for senescence and moisture.

Thank you very much