I have been using Pix4DFields since the beginning of the 2021 growing season. I use a multispectral camera allowing me to create NDVI and other vegetation indices. When I create NDVI orthomosaic maps in crops that are seeded in 30" rows, the orthomosaic map is a mix of crops and soil with crops taking about 30% of the surface area, since the canopy has not been reached yet.

I would love if a feature would be able to remove the soil values from the orthomosaic map and only keep the values associated to plants. After such soil values would be removed, I could be able to gather information on plant health for different section of my fields and see if there is a difference in the average NDVI values for different section of my fields.

TLDR: A feature that allows to remove the portion of orthomosaic maps that is associated to bare soil allowing to have a processed map containing only living plants in it.

thank you for your feature request! Indeed this would be a great addition to our tool and it ranks quite high on our to-do list.

But I don’t want to leave you without a potential solution for your problem until we implemented it in our software. You can use the Advanced Layer Visualization to find out the threshold value you need which masks out the soil from the vegetation.

Now you can use this in the custom index calculator to create an custom NDVI which masks out all values under that threshold and you end up with a layer which just represents your crops.

Modified: 1-27-2021 Hello, we are updating some information according to your questions. Besides the generation of standard vegetation indices, the use of the index calculator allows us to generate a custom index that adapts better to their specific crop scouting or crop protection needs. Some of you asked about soil masking; vegetation masking or generating maps within a certain threshold. Currently, the following workaround can be used: Process your images and get the orthomosaic Generate…

And if you want to create more advanced zonation’s you can have a look at this video: 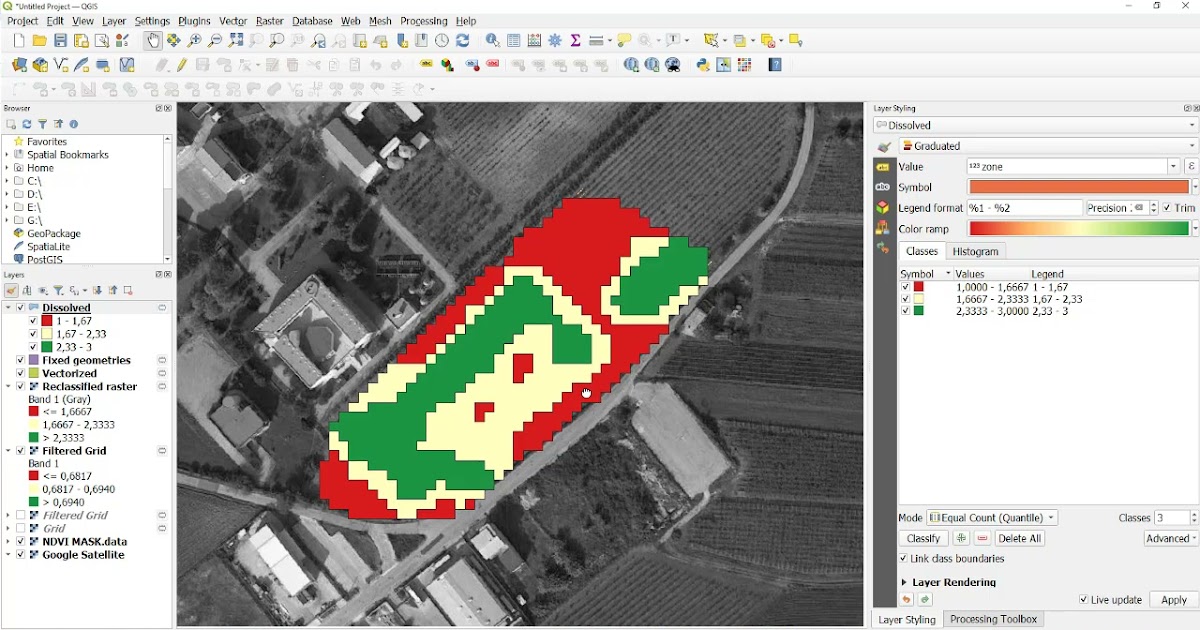 But our aim is to have all those steps represented in a clean and meaningful way in Pix4Dfields down the road.

Thank you very much for your feedback!

Thank you very much for your comment. I started looking on how to do such an operation on QGIS. The video you sent me seems like a great tutorial on how to perform my request. I already use the Advanced Layer Visualization, which is great to remove most of the soil, however it clusters the colors on a smaller range of values which makes it hard to see difference in health between different plants. Ideally I would like to have small values removed while keeping a wide color gradient

I had another feature idea that I think would be worth to add in Pix4d. I have some fields with multiple missions that I did over a growing season. For now, the compare function allows to compare different maps generated for the same mission. I would love if we would be able to compare maps from different mission. For instance if I have two missions that are the same field one month apart between each mission, I would love to be able to compare the NDVI maps from each mission together to see how my fields evolved through time. I hope this wouldn’t be so hard to include as the compare function is already present!

A great pleasure to see you are sharing feedback with us. It is very valuable to us.

About the comparison tool, I shared this feedback with the team. It is indeed a great idea. Thanks so much for sharing it. Meanwhile, we have some users who process multiple datasets of the same crop in the same project. Maybe this can help you as well. Then you can rename the layers with their date when your acquired the data, plus the information you might need. If you are using an RTK drone, the maps will align better than if you do not do use RTK as PIX4Dfields relies in the accuracy of the drone.

Let me know how this goes